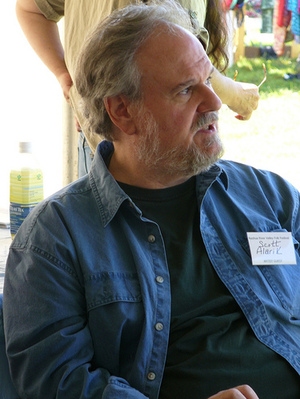 Pending an obituary, this is Scott's biography. He died unexpectedly in November/December 2021. He led a remarkable life! May his memory be a blessing. His music will live on.

"The finest folk writer in the country." Dar Williams.
"One of the best writers in America" Pete Seeger

For the past 25 years, Scott Alarik has been arguably the most prolific and influential folk music writer in the country. He covered folk for the Boston Globe, contributed regularly to public radio, including seven years as correspondent for the national news show Here and Now, and wrote for many national magazines, including Sing Out, Billboard, and Performing Songwriter. From 1991-97, he was editor and principal writer for the New England Folk Almanac. In 2003, his first book, Deep Community: Adventures in the Modern Folk Underground, was published. Never before had the landscape of modern folk music been so comprehensively documented, prompting the Library Journal to call it “an essential primer to the continuing folk revival.”

Now, Alarik has written Revival, the first novel set entirely in the folk world of the 21st century. Even before publication, the love story was earning raves from Booklist (“A joyous celebration of folk musicians and their world”), and from folk stars like Tom Paxton, Ellis Paul, Catie Curtis, John Gorka, Alison Brown, Mary Gauthier, and Gordon Bok, who called it “just about the warmest, most nourishing book I’ve read.” “Music lifts us up,” wrote songwriter, organizer, activist, and author Si Kahn. “So does Revival.”

Alarik was born in Minneapolis, Minnesota, and became a folksinger immediately after graduating from high school in 1969. He made his professional debut as a weekend regular at an oh-so-‘60s coffeehouse called Heads Together. He also actively opposed the Vietnam War, joining the Resistance Movement while still in high school by publicly refusing to register for the draft. He was convicted of resisting the draft and served 19 months in federal prison. After his release in 1972, he became a fixture on the national folk circuit, performing regularly on A Prairie Home Companion, releasing three vinyl albums, and appearing at such legendary venues as the Coffeehouse Extemporé in Minneapolis, Somebody Else’s Troubles and Earl of Old Town in Chicago, Caffé Lena in Saratoga Springs, Godfrey Daniels and the Cherry Tree in Pennsylvania, the Speakeasy in Greenwich Village, and the Idler, Old Vienna, Iron Horse, and Passim in Massachusetts. Prairie Home Companion host Garrison Keillor wrote of Alarik, “I have rarely seen an audience in such a good mood as when he’s just been there.”

He is also a popular presenter of talks on folk music topics at colleges, museums, folk societies, and other venues. He was invited to deliver the inaugural Botkin Folklife Lecture at the Library of Congress, and teaches an annual course called “Understanding Folk Music” at McDaniel College’s Common Ground music camp.

Alarik has maintained his performing career, appearing at coffeehouses near his home in Cambridge, Massachusetts, and releasing two CDs, “-30-” and “All That Is True.” In singing the praises of Revival, Si Kahn wrote, “Scott Alarik has long been one of the wisest and most literate voices on the folk scene, from his articles and books to his own passionate songwriting, storytelling and performances.”